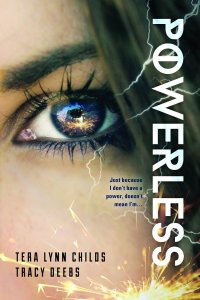 Kenna is tired of being “normal”. The only thing special about her is that she isn’t special at all. Which is frustrating in a world of absolutes. Villains, like the one who killed her father, are bad. Heroes, like her mother and best friend, are good. And Kenna, unlike everyone else around her, is completely ordinary— which she hates.

She’s secretly working on an experiment that will land her a place among the Heroes, but when a Villain saves her life during a break-in at her lab, Kenna discovers there’s a whole lot of gray area when it comes to good and evil and who she can trust.. After all…not all strength comes from superpowers.

Having never previously read any of Tera Lynn Child’s books, or Tracy Deeb’s books I was interested in Powerless. The idea of a world of superheroes, and villains really intrigued me, and what can I say, I do enjoy a good superhero 😉

The book begins with us believing that the main protagonist, Kenna Swift, is an ‘ordinary’ who works with her mother in a top secret lab. Her father was a top superhero, who died when she was young, and we see that she has some problems with how he died, leaving it a mystery of what happened throughout the novel. Her life is turned upside down when she discovers some secrets about the superheroes she works with, and her mother, leaving her to question everything that she believes about the superheroes and the villains.

Overall I did enjoy the book, the story is action packed, and moves at a quick and exciting pace which I enjoyed. Similarly, the characters are funny, and in my opinion the story can be quite comical and light hearted in parts. The characters are conveyed well, and you can understand their thinking process as their personalities are developed in great depth. However, there were certain aspects that annoyed me, and I think can be improved in Powerless.

The main character, Kenna Swift is a strong female lead; who takes charge and does not back down, even though due to her ‘ordinary’ status she is often treated as a child and ignored or spoken to condescendingly. I do, however, feel that many of my questions about her during the book were left unanswered, and so I couldn’t completely understand or connect with her character. Similarly I found that the other characters in the book didn’t have much background/context, and the idea and story itself didn’t have a very strong base (I was not 100% sure where the story is set). While the story was detailed, I couldn’t understand where everyone else (who are outside the main group of characters) is in the book – for example, does Jeremy have any family? Doesn’t the general public have a reaction when houses are ransacked or burned down? Also, where are the rest of the villain community? Even though the story clearly shows there is a division between the heroes and villains, where do the villains live and why do they have safe houses in superhero ‘territory’? While I enjoyed the book, I think there could be more context and background, as well as more world building. I also had a problem with understanding the relationship between Draven/ Dante and Anton, as well as why and how was Deacon taken by the superheroes, especially if he is the son of the villain leader. However, this is the first book of a series so these questions might be answered in further book(s), which I am waiting for in anticipation!

While there is not much world building, the relationships between the different main characters are written well and in depth. There are hints that there is a strong romantic relationship between Kenna and Draven, as they slowly begin to know each other. I thoroughly enjoyed the constant action and fast pace, leaving little space for boredom. Out of the characters in the novel, I enjoyed Rebel as she was a fun and lively character. I also enjoyed Jeremy’s character, which was quirky and often light hearted.

The book is well written, with easy and well paced dialogue, making the book nice to read. The writing style is blunt at times during the story, however I think this worked in favour with the storyline and the fast pace of the story, emphasising the action taking place.

The ending left me asking many questions, and wanting to read the next book! What we know about Kenna is questioned, and we are left wondering what has happened to Rebel, and what her father has done to her.

Powerless is action packed, funny, and swiftly moves through a complex and dynamic story idea. While it may be underdeveloped in certain areas of world building and context, the characters are brought across strongly, and the story  reads nicely. The writing is strong, and easy to read, which makes the book a good read!

Overall I rate it 3/5 stars