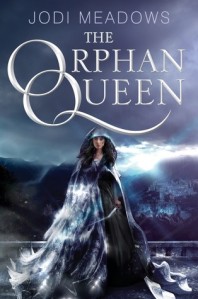 Wilhelmina has a hundred identities.

She is a princess. When the Indigo Kingdom conquered her homeland, Wilhelmina and other orphaned children of nobility were taken to Skyvale, the Indigo Kingdom’s capital. Ten years later, they are the Ospreys, experts at stealth and theft. With them, Wilhelmina means to take back her throne.

She is a spy. Wil and her best friend, Melanie, infiltrate Skyvale Palace to study their foes. They assume the identities of nobles from a wraith-fallen kingdom, but enemies fill the palace, and Melanie’s behavior grows suspicious. With Osprey missions becoming increasingly dangerous and their leader more unstable, Wil can’t trust anyone.

She is a threat. Wraith is the toxic by-product of magic, and for a century using magic has been forbidden. Still the wraith pours across the continent, reshaping the land and animals into fresh horrors. Soon it will reach the Indigo Kingdom. Wilhelmina’s magic might be the key to stopping the wraith, but if the vigilante Black Knife discovers Wil’s magic, she will vanish like all the others.

Jodi Meadows introduces a vivid new fantasy full of intrigue, romance, dangerous magic, and one girl’s battle to reclaim her place in the world.

The Orphan Queen was a fantastic, intriguing and chilling read filled with action and mystery! However, I also feel that there could be some improvements. I have to say though, overall I really enjoyed the book!

To begin with I loved all the characters within the book! Wil (Wilhelmina) was brilliant; she is a strong willed, loyal, and an independent protagonist who can also be quite humorous. The character development was one of the best aspects of the book for me, and while the characters were detailed, and had individual personalities, there was an air of mystery around Wil, and of course Black Knife ;). I don’t want to spoil the book, but the plot twists concerning the characters was executed really well. While the character plot twist was not a complete surprise to me, it was still great to read. I am very interested to see where the characters develop in future book(s). Another one of my favourite characters from the book is Melanie. Being the best friend of Will, she also takes part in some action and is masterful in deception within the novel. Her friendship with Wil is vital, and while they may argue with each other the relationship is strong. Melanie is a strong female character, and is headstrong in many of the things she does.
Black Knife is another brilliant character. While most of the other characters have detailed backgrounds, Black Knife remains somewhat of a mystery throughout the novel. I was hesitant on whether this would work as I thought we would be unable as readers to connect with him, however I was very wrong! His character while mysterious, is brave and intelligent, and the relationship between himself and Wil in the novel grows, refining and developing Black Knife’s personality. The relationship between both Black Knife and Wil develops into a romance towards the end of the novel, although this does not takes over the plot.
Moreover, Patrick, another character in the novel – a mentor for Wil, has an interesting and twisted character. The power play between Wil and Patrick adds the plot line, and the end of The Orphan Queen has left me in great suspense!

The world building is sufficiently developed within the book. In areas I felt that the world building was a little rushed, and could have been depicted in more detail, however this did not ruin the book for me as in other sections of the book the world is fantastically vivid. When Wil travels to the ‘Wraith Land’ the descriptions of the mirror lake, and the village around it are brilliant! I actually got shivers when Wil is traveling through it. The fantastical and backwards world within the ‘wraith’ was intriguing, and was one of my favourite parts of the book. The Indigo City is similarly described in great detail, and so these ares of the plot were great to read.
Additionally, the magic and fantasy within the novel were a unique idea. Magic is banned as it creates ‘wraith’, deadly energy that is spreading from the West to the East. While the different types and uses of magic is not delved into deeply, it is skimmed across, hinting at further development in later book(s).

In addition, the plot of the story grabbed my attention from the start. It is action packed, and full of twists that kept my interest peaked throughout the novel. The interweaving problems which Wil and the Ospreys face are well written. I particularly found the ending of The Orphan Queen fantastic – this is the best part of the book in my opinion. Particularly towards the end of the novel I found my heart pounding, and the cliff hanger with which the story ends is brilliant!

While I enjoyed The Orphan Queen there are some aspects of the novel which I thought could be improved. As I have mentioned, the world building in some areas could have been developed on, particularly the journeys to and from the Wraith Land, and some of the action which Black Knife and Wil get into during the night, in the city. Some of the smaller details I felt were missed out; which would have made a good contribution to the story, such as the traveling around the city, as Wil often does. However, this was not a major problem for me, and would not bother most readers in my opinion.

Overall I enjoyed The Orphan Queen and would recommend the book to any lovers of fantasy, action, and romance! While I had some problems with the world building, this did not ruin reading the book (which is why I have rated it 4 lovely stars!), and the character development within the book is brilliant. I look forward to reading the second book in the series The Mirror King!

Favourite Quote:
“I know very well how pain could last, and fester, and shape a person in unnameable ways”

Books in the series: